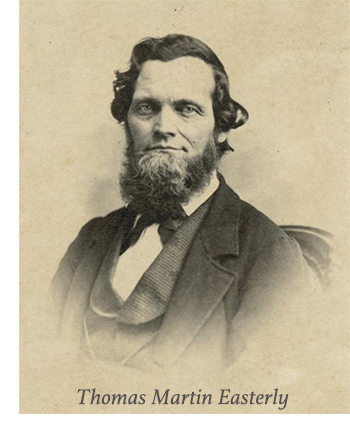 Thomas Martin Easterly was born to Tunis and Philomela Richardson Easterly in Guilford, Vermont on October 3, 1809. The poor farming couple struggled to care for their brood of five children, and by age 11, young Thomas was living away from his family, presumably to earn a trade. by age 21, he was living in St. Lawrence County, New York, where he scraped by as a calligraphy and pen-making instructor throughout New York and New England. A decade later, he began studying photography, and sought to establish himself as a daguerreotypist.

In 1844, Mr. Easterly boarded the Mississippi steamship and headed for New Orleans, where he worked briefly as a daguerreian. However, he quickly discovered that landscapes generated few revenues, and so he relocated to Illinois, where he began advertising himself as a portraitist. He soon met fellow photographer Frederick F. Webb, who was managing a gallery for the Daguerreotype Art Union and Photographic Association. The duo formed a partnership and began making portraits of local residents throughout the Midwest, and also photographed the Young brothers, who would later be executed for the murder of Davenport, Iowa founder Colonel George Davenport. The itinerant photographers later split up at Jefferson City, Missouri, where Mr. Webb opened a solo studio. Mr. Easterly set up shop in St. Louis at 112 Glasgow Row. One of his first sitters was Sac Fox Chief Keokuk, and the emphasis upon facial expression and ornate attire became the photographer’s trademark. His photographic objective was to capture both the individual and cultural essence of his subject.

Mr. Easterly’s success in St. Louis necessitated a move to a larger gallery on 112 Fourth Street, where he advertised “specimens” that consisted of “likenesses of eminent divines, prominent citizens, Indian chiefs, and notorious robbers and murderers.” He was literally a one-man operation and was rigid in his practice of daguerreotype conventions, eschewed props and elaborate backdrops, and refused to acquiesce to customer whims. For example, he refused to photograph children because of their unpredictable behavior, which closed to him a very lucrative consumer market. However, by joining forces with prominent local photographer John E. Ostrander, Mr. Easterly expanded his clientele considerably. After Mr. Ostrander’s death in 1849, he acquired 100% ownership of his profitable studio. The following year, Mr. Easterly married Anna Miriam Bailey, and for the next 30 years produced daguerreotypes at the exclusion of everything else, including the less labor-intensive dry-collodion methods.

After 1870, Mr. Easterly’s daguerreotype output had diminished due to increasing health problems and paralysis. Historians now believe that the effects of bromine, which was used in daguerreotype processing, adversely affected the central nervous system. His years of inhaling mercury vapors and other toxins likely contributed to his death from “congestion of the brain,” on March 11, 1882, at the age of 71. Although Mr. Easterly’s professional reputation never exceeded his regional Midwestern boundaries and likely suffered due to his steadfast refusal to evolve from the daguerreotype, he is now highly regarded as one of the medium’s most impressive artists. Several of Thomas Easterly’s portraits may be found at the Missouri Historical Society, the Smithsonian Institution, and the Vermont Historical Society, among others, as well as within small private collections.

2019 Preservers of the Native American culture through photography by Bob Walden (URL: https://www.collectionconnections.com/preservers-of-the-native-american-culture-through-photography).