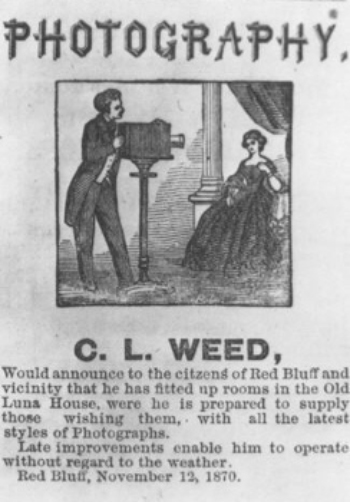 The reputed father of Yosemite Valley photography was actually an Easterner by birth. Born in New York on July 17, 1824, Charles Leander Weed spent most of his childhood in Wisconsin. As a young man, he traveled to northern California, where he gained considerable experience as a daguerreotypist and camera operator for George J. Watson’s Sacramento gallery. He joined photographer Robert H. Vance’s growing business as a junior partner in 1853, and though he produced excellent photographs during his tenure, he received very little recognition for his efforts. Sadly, Mr. Weed never copyrighted his work, which allowed many photographers to establish their own professional reputations by taking credit for his images.

Despite his relative obscurity, Mr. Weed is believed to have been among the first to practice the wet-collodion process shortly after witnessing its demonstration at the California State Fair in 1855. His views of the American River are reportedly California’s first wet-plate stereographs. A tour of the Yosemite Valley conducted by businessman James Hutchings in June 1859 turned out to be a life-changing event for Charles Leander Weed. He took what are believed to be the first pictures of this majestic California landmark, which proved to be no small feat. Mr. Weed had to transport nearly 50 pounds of camera and developing equipment to capture these spectacular images, that thereafter were often mistakenly credited to his senior partner, Robert H. Vance. Mr. Hutchings later featured many of these wet-plate photographs in his California Magazine.

In 1860, Mr. Weed ended his partnership with Mr. Vance, and traveled extensively throughout the Far East, briefly operating a studio with another partner known only as Mr. Howard in Hong Kong. After a brief respite in California, Mr. Weed, accompanied by a brother and sister, traveled to the Hawaiian Islands, where he produced the first known mammoth plates of the region. Then, it was back to China, where a Weed Brothers Gallery opened in Hong Kong in 1866. The following year, Mr. Weed won an international award for his landscape images at Paris’s prestigious Exposition Universelle. At this time, Mr. Weed entered into an arrangement with the Lawrence & Houseworth publishing company, and teamed with his colleague Eadweard Muybridge for another Yosemite photographic expedition in 1872.

Mr. Weed spent his later years working primarily as a photoengraver. He married Sarah P. Irish in the mid-1870s, and the couple lived quietly in Oakland until the photographer’s death on August 31, 1903 at the age of 79. Due to his lack of copyrights and reluctance to sign his images, Charles Leander Weed’s legacy languished in anonymity for decades until newer generations of historians and landscape photographers began researching and universally praising the work of the West Coast’s ‘mystery man.’ Today, his photographs exist only in print form (both albumen and stereograph), and the bulk of Mr. Weed’s prints can be found at the University of California’s Bancroft Library (Berkeley campus) and at the New York Public Library.